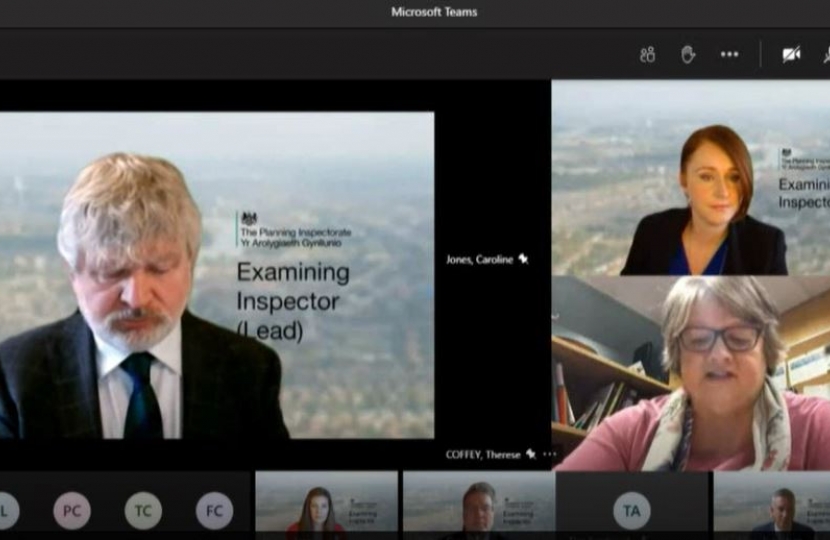 Last week, Therese made a further verbal submission to the Planning Inspectorate against SPR's proposal for huge substations at Friston and the associated cabling corridor from Thorpeness, which, if approved, would have a devastating impact on the local area including elements of the AONB. Instead, Therese's continue to suggest more appropriate locations like the brownfield site at Bradwell. See the full transcript of her remarks below, plus the letter she has recently written to the Secretary of State.

Thank you very much and for allowing me to contribute. I just wanted to flag a couple of things. I have received representations from a number of constituents on this although I won't name them for confidentiality reasons. I wanted to be clear though that I have written to the Secretary of State not prejudicing the outcome of the decision as it's my concern that people should be able to object to the overall decision of the proposal, while still agreeing potential conditions that may want to be posed in the DCO. I am concerned that this does feel like sharp practice, it's not happening in any other energy projects that I'm aware of locally, this approach where in effect, people feel compromised about their ability to be able to make representations to this perfectly legal process. Otherwise, they may feel they will be financially worse off as a consequence on the basis of any further future decisions by the Secretary of State. So I wanted to flag my concerns about how this certainly from the outside, I although I appreciate what the lawyers have just said for SPR, feels like it is trying to block. Albeit. It's a relationship that an NDA has between the contractor the person that the two parties, but I have shared those concerns directly with the Secretary of State.

Thank you very much, Inspector Rynd. I’m conscious we’re referring to the DCO itself but I just want to make very clear that I have no specific objection to the offshore elements of EA1 & EA2. Any issues regarding environmental issues will be well addressed by our environmental regulators, principally the MMO.

I am also, of course, aware of the emerging policy, which is that the Prime Minister made a commitment to update the Conservative Party Manifesto so that we have 40GW of offshore wind electricity by 2030, rather than 30GW.

The issue though, throughout all of this, has always been with the proposed onshore infrastructure – and the more energy projects proposed for the east coast – the more important it is that there’s an integrated approach.

To recap, in March 2019, nearly two years ago now, the government published its “Industrial Strategy: Offshore Sector Wind Deal” document which committed to addressing “strategic deployment issues including onshore and offshore transmission and cumulative environmental impacts. That becomes increasingly relevant, I think, especially in light of the ruling yesterday by Justice Holgate.

In Summer last year, the Energy Minister, now the Secretary of State, announced the Offshore Transmission Network Review into how energy firms bring their electricity back onshore to the National Grid. That review has a focus on “identifying tactical near-term actions that can be taken and early opportunities for coordination for projects in the short- to medium-term” as well as a “longer-term strategic review to develop a new regime that can ensure a more coordinated approach for the future”.

The National Grid contribution to the review underlined that “an integrated approach could reduce the number of onshore landing points by about half and it  suggested that “the majority of the technology required for integrated design is available now.”

I think that is something that the applicants seems to agree with considering their commitment to a Scotland to England super-highway, known as the Eastern Link, bringing offshore energy on shore in an integrated way with other developers with cables being routed up to 440km far more than what is being proposed today or alternative sites which could be considered. Construction could start in 2024 and is expected to be complete by 2030. So time does not seem to be a barrier there.

People in this area are already familiar of the concept of using HVDC cables for multiple wind farms and having just one route and connection point direct to Bramford as that is precisely is what is supposed to have happened on these wind farms. The Examining Authority may wish to note that SPR had previously received consent for such a proposal initially landing through Bawdsey but SPR later changed their connections to AC and has effectively led to the proposals for onshore infrastructure being considered here today.

During the adjournment debate in Parliament on the 5th November, Kwasi Kwarteng said that “the argument for some form of offshore network review had been won.” – again referring to a system of integrated and coordinated connections. I shared this with the examining authority and it’s been published in Hansard.

And then in December, just a couple of months ago, the government published the Energy White Paper. A document designed to clearly set out a new policy framework, which commits to an integrated approach rather than single point-to-point connections.

The White Paper even specifically mentions the east coast of England and the need for a more “strategic approach” Suggesting the use of ‘hybrid, multi-purpose interconnectors, which are already being explored by developers in the UK and other countries, to get the most from our offshore wind and transmission assets.”

And it is in light of this changing policy landscape, I really think SPR need to look again at how they bring their energy from EA1 & 2 onshore. I have been consistent in suggesting the brownfield site at Bradwell in Essex is a much better option for the onshore infrastructure desired– which has a greater potential capacity than the substations proposed for Friston.

In fact, I think there is now such a clear direction on this from government that I would be inclined to back the proposal from SEAS in suggesting a split decision. Approving the offshore works as not to unduly delay the project but with a clear signal that instead of the current spaghetti-like cabling that we could end up within East Suffolk, holding off on an onshore decision until a coordinated proposal is put forward that complies with emerging government policy. There is already a precedent for this, in which I am thinking of the Triton Knoll wind farm when National Grid re-considered the connection location.

I would suggest this is increasingly noteworthy for the Examining Authority particularly in regard to the rulings by Justice Holgate on Pearce vs the SoS and Pearce vs Vattenfall which were published yesterday and to which you referred at the start of today’s hearing.  I too have not yet been able to absorb the full details of the rulings but the principle set out by Justice Holgate seems clear that government should regard the cumulative impact on the local environment in the assessment for each application.

We know that National Grid has already given connection commitments to other developers in this area which lend themselves to further onshore infrastructure being required in this area. I think some of that information has been been released publicly like the Nautilus interconnector while notice to another developer was released inadvertently but nevertheless, those offers have been made – and I should point out that it is my understanding that National Grid is legally obliged to do so, even if no pre-planning consultation has started.

The examining authority, I’m sure, will be aware that the cumulative impact is potentially huge for this part of the country. And it has long been my view as Member of Parliament for Suffolk Coastal that the full likely impact needs to be assessed now in a coordinated, cumulative approach when considering this application.

Now, in light of the rulings, it is my intention to make further representations on this point to this application and also to the Secretary of State. I do not know if he will appeal against these rulings but I will make the case that this ruling gives him the opportunity to accelerate the full adoption of his emerging policy.

Letter to the Secretary of State

Dear Secretary of State,
I have received the correspondence below about concerns that efforts being made by Scottish Power Renewables (SPR) to prevent persons who would otherwise have a reason to object and provide support to groups and associations opposing SPR’s application in respect of EA1N and EA2, from opposing the application for consent.

I have not come across this practice before and it feels like strong-arming, with very sharp practice.  I would grateful if you could furnish me with a response.

The correspondence that this relates to can be found here - https://infrastructure.planninginspectorate.gov.uk/wp-content/ipc/uploa…