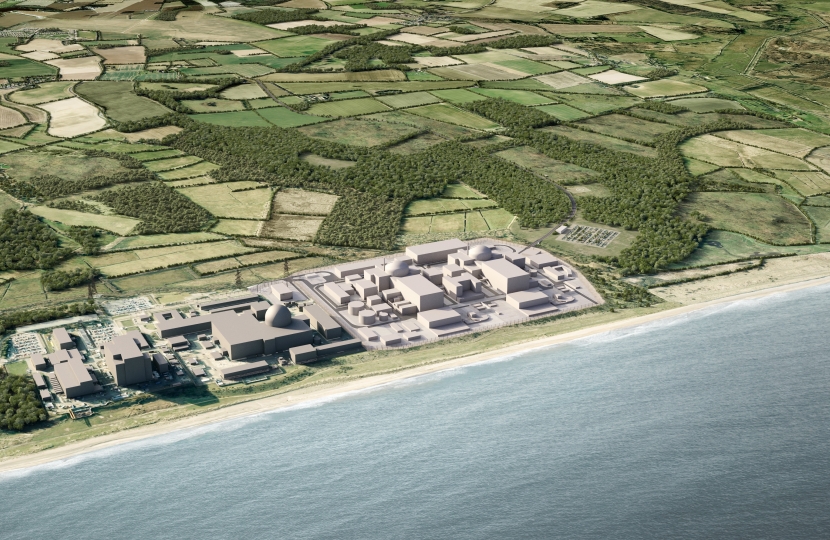 Therese has today backed the construction of Sizewell C but in her Development Consent Order submission says that EDF need to make some significant changes to their planning application in order for it to get consent.

Therese said: “Tackling climate change and ensuring we have enough electricity as we phase out fossil fuels is vital to the success and sustainability of this country. Nuclear power as a zero-carbon energy source is a key part of the energy mix and Sizewell is an important nuclear cluster, generating electricity before the area was designated an AONB in 1970.  The economic gain from a project the size of this would be really positively felt - with the creation of thousands of jobs including well-paid, long term jobs - but changes need to be made even at this stage to get my full support.”

Therese added, “I do understand people’s objections though and the impact it will have on our area. Mitigation against all of these impacts is absolutely key.”

In her response to the pre-examination stage – Therese set out her desire for fewer lorries and for far more freight to come in by train and sea-borne methods during the construction phase.

Therese said: “I still think EDF need to bring in much more material by non-vehicular means.

Due to the prevalence of the road-led strategy and no proposals for a passing loop to increase capacity on the East Suffolk line, a large portion of the rail freight will be received at night. Adversely impacting the residents of Woodbridge, Melton, Saxmundham and to a certain extent, Leiston, before the new branch line is built into the construction site. I have asked the examining authority to challenge this. If the passing loop isn’t constructed, then they need to condition further mitigation to reduce vibration and noise. For example, requiring welding and lubrication to the track to reduce vibrations and train screech, sound barriers and a need for quieter rolling stock.”

Therese added: “I do support the Two-Village bypass protecting the villages of Stratford St Andrew and Farnham, which will be a significant legacy benefit. I also support the construction of a new Sizewell Link Road to take the pressure off the B1122 and the communities of Theberton and Middleton Moor. I have suggested that this should be removed on the completion of the project though. A permanent road in that location would have a detrimental impact on the landscape and have no legacy benefit.”

On environmental matters, Therese said: “It is essential that we protect our precious landscape. Many people have commented that the site is within the AONB but that was the case prior to Sizewell B. Despite that precedent, as the Defra Minister responsible for the 25-year Environment Plan when it was published, I’m keen to see this scheme stand out as an environmental exemplar with EDF contributing to nature recovery as well as just mitigation. The examining authority need to look carefully at whether the experts at Natural England and the Marine Management Organisation are satisfied that the measures submitted are enough – in particular to ensure the safe protection of places like Minsmere and Sizewell Marshes.”

Although there is a large amount of work that needs to take place during the planning process, including satisfying regulators that appropriate mitigation measures are put in place, Therese is a firm believer that Sizewell C will be of significant benefit, not just to the UK as a whole but locally here in Suffolk.

Kickstart Taken up a Gear

As Secretary of State for Work & Pensions, I’m delighted that our Kickstart Scheme, launched in September, has now created more than 120,000 job placements for young people - with their wages paid for by the government.