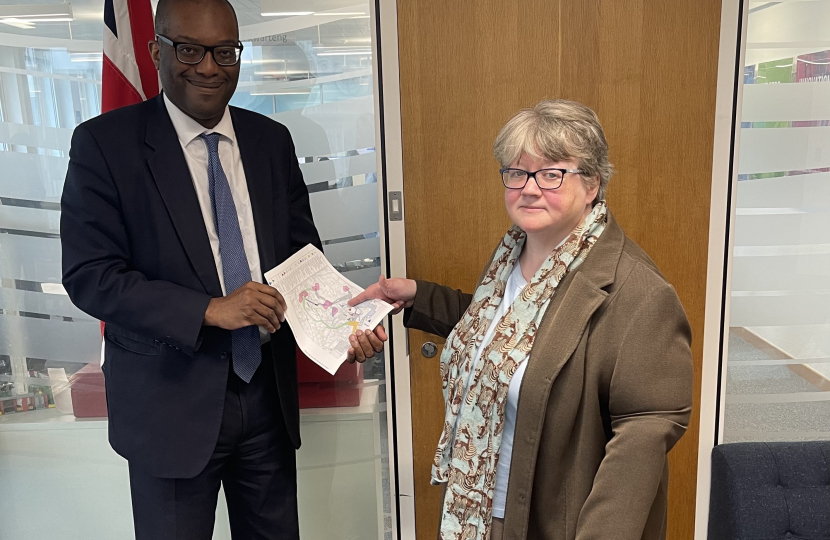 Following the decision to grant development consent for a huge substation in Friston, Suffolk Coastal MP, Therese Coffey met the Energy Secretary, Kwasi Kwarteng recently. At the meeting she sought assurances that any future energy infrastructure applications will need to go through a robust site selection process and that sufficient weight be given to cumulative impact.

Change is coming with the new National Policy Statements for Energy which place an obligation on applicants to demonstrate optimum connection locations and state that cumulative impact must be considered. However, unless there is a successful judicial review, this won’t change the Friston decision.

Therese said: “In my various verbal and written submissions to the recent planning hearings, I advocated that considerable weight should be given to the emerging policy framework, including the new National Policy Statements and the Offshore Network Transmission Review, which I campaigned for. Ultimately though they were judged under the current regime, which meant Scottish Power Renewables’ didn’t have to engage with them.”

"Although a specific date is yet to be confirmed, the Secretary of State has intimated that the new policy statements should be designated later this year, which is a positive step, considering the risk of further energy applications. I suggested that if they were going to be delayed then more robust transitional guidance might be required.”

Therese added: “I also pressed upon him the need for National Grid to be upfront with the locations that they’ve already offered onshore connections to. I’m furious that despite raising it several years ago, that they haven’t yet looked into my suggested alternative at Bradwell in Essex, the site of a disused nuclear power station. I have asked the Secretary of State to consider this.”

“With Sizewell B, the prospect of Sizewell C and large amounts of North Sea wind power coming ashore in the county, I’m concerned from an environmental and energy security point of view that too much onshore energy infrastructure is being concentrated into our small bit of Suffolk. I’m determined to try and change this.”

Senior Ambulance Service Staff to be Questioned on Response Times

Therese was disappointed to see this week that the most recent average ambulance response times for category 2 emergencies are double what they should be calling them 'shockingly bad'.