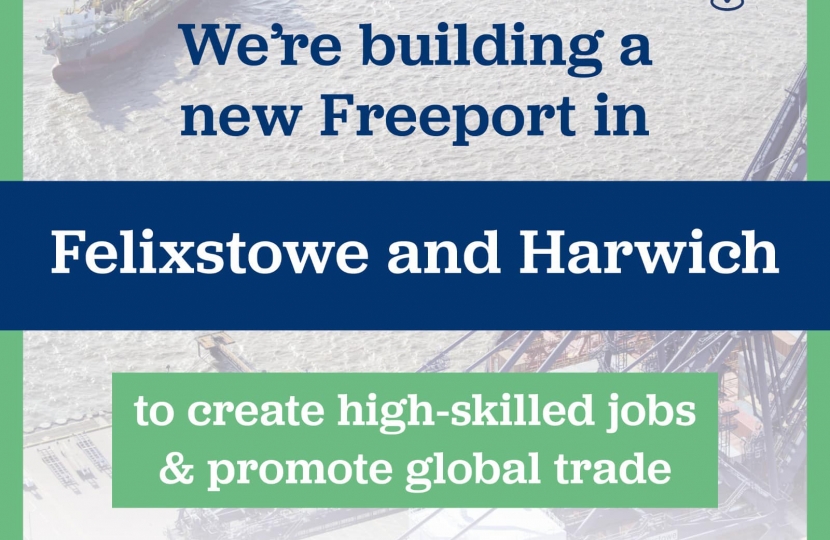 The Chancellor has today confirmed a major economic boost for East Anglia by giving the go-ahead to Freeport East in his Budget announcement to the House of Commons. The decision will enable the creation of a single customs zone alongside innovative plans for green energy.

Freeport East is a collaboration between the Ports of Felixstowe & Harwich, EDF and Ryse Hydrogen. Felixstowe is, of course, the UK’s largest container port and Harwich an important terminal for roll-on/roll-off non-containerised freight.

Therese said: “I’m absolutely delighted with the Chancellor’s announcement. This is great news for employment and prosperity on both sides of the Harwich Haven with over 13,500 jobs created, many of which will be highly skilled.”

Therese added: “I would like to thank everyone who has worked so hard to put this bid together, particularly Hutchison Ports, and the Chancellor for confirming it. As he said in the chamber today, this will be an unprecedented economic boost.”

Therese Continues to Speak out Against Huge Substations at Friston

Late last month, Therese contributed to the final issue-specific hearings at the Planning Inquiry determining Scottish Power Renewables’ application for huge substations at Friston and the associated cabling corridor from Thorpeness. If approved, the proposal would have a devastating impact on th