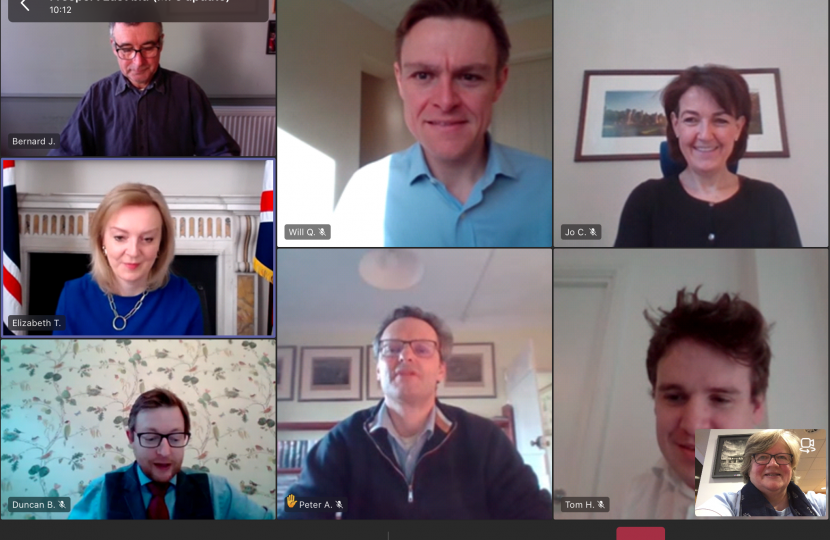 In a campaign coordinated by Therese, twenty East Anglian MPs have put their name to a joint letter to the Chancellor, Rishi Sunak, asking him to grant Freeport status to the Felixstowe/Harwich bid.

Freeport East is a collaboration between the Ports of Felixstowe & Harwich, EDF and Ryse Hydrogen to create a single customs zone alongside innovative plans for green energy. Felixstowe is, of course, the UK’s largest container port and Harwich an important terminal for roll-on/roll-off non-containerised freight.

Therese said: “I’m incredibly grateful to my colleagues across East Anglia for backing the bid. If successful, Freeport East would be a great boost for employment and prosperity on both sides of the Harwich Haven with over 13,500 jobs created. Currently, GDP per capita across the Haven Gateway significantly trails the broader East of England region, so this bid perfectly fits the government’s ambitious levelling up agenda.”

Therese added: “Freeport East will also use our location at the heart of massive new wind and nuclear generation projects to become a national centre of technical excellence.”

Member of Parliament for Harwich, Bernard Jenkin said: “This bid is economically the most significant for the UK economy as a whole. Felixstowe-Harwich is the UK's biggest port.  We serve the UK's biggest exporters, have the biggest reach into our industrial heartlands, we will generate the most levelling up, and we offer the biggest contribution to carbon reduction. This bid is a no-brainer."

The government is looking to create 10 freeports across the UK and are due to make an announcement next month.

Full text of the letter

As local Members of Parliament, we wish to urge you to grant Freeport status to the Freeport East bid.  Freeport East is best placed to meet the Government’s objectives for Freeports to establish them as national hubs for global trade and investment across the UK,  promote regeneration and job creation and create hotbeds for innovation.

GDP per capita across the Haven Gateway areas significantly trails both the broader East of England region and the whole of England, with GDP in Essex Haven Gateway at £25,800 per head compared to £31,980 across England as of 2018. 18% of LSOAs (areas) in Tendring and 14% of LSOAs in Ipswich were ranked among the top 10% most deprived in England in 2019 according to the English Indices of Multiple Deprivation, with four LSOAs in Tendring ranking among the top 1% most deprived areas in England and one area (Tendring 018A) ranking as actually the most deprived LSOA in the country.

Wage growth has been particularly weak in recent years, reflecting the rise of self-employment and less secure contracts, especially in lower skilled jobs. ONS data show that average weekly earnings in our proposed freeport area are often significantly below the national average. Weekly earnings in Tendring (£556) and Ipswich (£527) are below the GB average (£587) and locations such as Liverpool (£571) which are often considered more ‘deprived’. Low incomes are widespread and entrenched across many of our communities.

Freeport East is the major gateway for unitised trade. We welcome and support the regenerative benefits other Freeports may bring but shipping economics dictate that the largest container ships will always call at ports offering the minimum deviation from the main routes into Antwerp/Rotterdam. Freeport East has the minimum deviation and for that reason is the major gateway linking exporters in the Midlands and North with global markets. A successful Freeport East will boost regeneration across the UK having the potential for £5bn of additional GVA over ten years as a result of enhanced international trade.  Additionally, it is uniquely equipped to meet Government’s objective for global trade hubs and to take advantage of opportunities presented by new trade deals.

Meeting our net zero targets will create well-paying jobs across the UK. Freeport East will use our location at the heart of massive new wind and nuclear generation projects to become a national centre of technical excellence.  The Freeport will host the UK’s first Green Hydrogen Hub, in partnership with UK Power Networks, Wrightbus and Ryse Energy – led by Jo Bamford.  This is a vital kick-starter towards the government’s target to develop 5GW of low carbon hydrogen by 2030, when the global market will be worth $420 billion, more than double what is today.

The East of England is already has three of the UK’s most important centres of innovation, BT’s research centre at Adastral Park, Norwich Research Park and Cambridge University – leading DIT to recognise the area as a High Potential Opportunity Location.

Freeport East is backed by Hutchison Ports, one of the UK’s largest inward investors and phase 1 of the development has planning consent and can be stood-up quickly giving tangible evidence of the policy’s success.

We hope you will be able to support this bid.

The letter below was signed by: